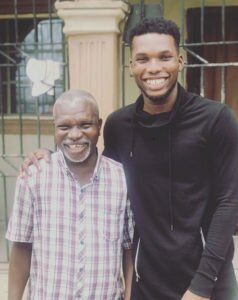 Victor Adere Also known by his stage name Victor Ad is a Nigerian Pop singer and songwriter born and brought up in Lagos.

He is an afropop sensation artist from Delta state part of Nigeria and also graduate of federal polytechnic Auchi, Edo state.

Victor Ad fell inlove with music at the age of six, he was influenced by music legends likes of Bob Marley, Sunny Ade, Michael Jackson and Lucky Dube.

Victor Ad began his music career professionally in 2014 with the release of his first official single titled “Jowo” and he came to limelight on a song he featured Erigga on “Motivation” single, a song which he sang the chorus.

After few Months he released Wetin we Gain Video which had over 400k YouTube views in few weeks.

Victor Ad is currently signed to by Ghana base record label, Etins records.

Victor Ad is such a talent to reckon with in the industry as he’s ready to take the industry by storm with many accolades awaiting for his amazing effort.

– They claimed that Victor AD’s hit song “Wetin We Gain” has been interpreted wrongly by many young people – Some Nigerians reacted to his claim, with some saying everyone is responsible for their actions.

Victor ad has been able to show his versatility on songs with his powerful vocals on singles such as: